In recent days there probably hasn’t been more buzz about any other dual-channel dash cams than there is for the Thinkware F800 Pro and the BlackVue DR750S-2CH. After all, both of these companies are considered leaders in the field, so it doesn’t come as much of a surprise that their products would garner so much interest.

We performed extensive tests on both these products, comparing them to the last detail in an attempt to come up with detailed reviews. While it was a tough call to pick a winner when putting up the Thinkware F800 Pro vs BlackVue DR750S-2CH, in the end, we decided on the Thinkware F800 Pro, but only by the slightest of margins. Here are all the details. 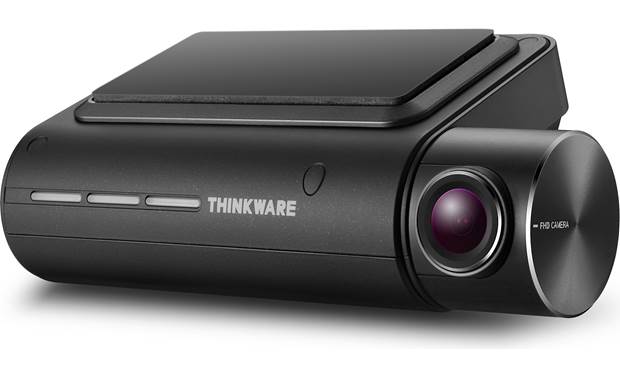 This quality is due to the fascinating Sony STARVIS sensors included both on the front and the rear camera. It is also very impressive that this camera records in Full HD both front and rear while its energy consumption is the lowest in its entire competition. Its all-black design is very sleek and discreet and looks very natural when inserted in the cockpit.

It has been reported that due to its design it is also safer to leave the dashcam overnight in the car, as due to its subtlety it is hard to notice it is there at all. The Thinkware F800 Pro supports up to 128GB memory cards and has its own cloud memory option as well, called Thinkware Cloud.

The Thinkware F800 Pro represents a better version than all its predecessors, and with its nice design and solid functionality, it is considered to be one of the best out there. The BlackVue DR750S-2CH is certainly a worthy rival of the Thinkware F800 Pro, because it is a great dash camera in its own right. This is a model that has been very popular with consumers, ever since its first edition back in 2013. The BlackVue DR750S-2CH includes features such as a 128GB memory card support, WiFi availability, cloud storage possibility, high-quality recordings and more.

The base camera also offers solid recording quality and video performance, falling not very much behind competitors. The quality of nighttime footage on the BlackVue DR750S-2CH is absolutely fascinating too.

Let’s look at some of the features of the BlackVue DR750S-2CH:

One thing that is immediately noticeable is that Thinkware have drastically changed the F800 Pro design, compared to earlier models from the same company. With the new design it is now possible for the dashcam to be placed horizontally. On the other hand, the DR750S-2CH looks quite similar to its predecessor, the DR650S-2CH.

The BlackVue model has a bigger and thicker body and is longer compared to that of the Thinkware model. An interesting feature of the BlackVue DR750S-2CH is that the mount is such that it allows for a 360° rotation. In comparison, the Thinkware F800 Pro enables merely 90° rotation, 270° less than its counterpart.

Considering the user interfaces of these two models, we also noticed some differences. The control buttons on the Thinkware F800 Pro are clearly marked and labeled, making it easy to operate with them. By contrast, the BlackVue DR750S dash cam has two buttons – a WiFi button and a touch sensor.

Each of these buttons performs a number of functions. The functions of the WiFi button include the toggling of the WiFi mode but also formatting the SD card. The touch sensor accounts for toggling manual recording as well as turning audio recording on or off.

Looking at the additional mounting, we can conclude that the BlackVue DR750S-2CH looks more subtle in vehicles that tend to have more upright windshield, whereas the Thinkware F800 Pro blends more subtly on vehicles with more diagonal windshield.

Furthermore, it can be argued that the Thinkware F800 Pro’s bracket makes for a more discreet blending within the cockpit.

This, of course, is not a general rule as there can be exceptions depending on the various interior designs of vehicles nowadays.

When it comes to dashcams, obviously video quality is the most important aspect that potential buyers take into consideration. The two models that we compare, The Thinkware F800 Pro and the BlackVue DR750S-2CH are both equipped with the same image sensor – the Sony STARVIS.

The difference with the BlackVue DR750S-2CH is that its front camera records at 60 frames per second. This should enable details, like license plate numbers, to be detected even at higher speeds.

We also compared the audio quality of both the cameras and we concluded that in this category it was the BlackVue DR750S-2CH that offered better quality. This is obviously of secondary importance when it comes to dashboard cams, but of course good audio quality also has its own significance for users. In this category, both cameras were hard to separate and choose from. In the end though, we decided on the Thinkware F800 Pro as the better ones in this aspect. It has a Low Energy Parking Mode as well as a Timelapse Mode, modes which give you the opportunity to reduce energy use.

Also, the power consumption on the Thinkware F800 Pro is quite low overall, regardless of whether you are using it with a battery pack or you are hardwiring it to the vehicle.

Moving on to other aspects, we concluded that The Thinkware F800 Pro contains better parking mode options. One of those options is that it automatically sorts out parking incident recordings from the rest of the recordings. By contrast, the BlackVue DR750S-2CH doesn’t have this feature.

When comparing the notification systems of both cameras, again it turned out that the Thinkware F800 Pro is the better option. The BlackVue DR750S-2CH only notifies if an impact is detected, which doesn’t prove very useful, as an impact could be a hit-and-run but also closing the door with a bit more force than usual.

The Thinkware F800 Pro’s notification system, however, includes a variety of incidents and motion clip notifications.

Both the Thinkware F800 Pro and the BlackVue DR750S-2CH have WiFi modes available. This simply means that you can connect them to your smartphone at any given time. This feature is common in dashcams recently, as it allows you to operate your dashcam, and toggle the settings and initial setup with ease.

Furthermore, you can store the footage without having to bother using an SD card. The WiFi setup process of the Thinkware F800 Pro is somewhat more complicated, because it also features hotspot mode, and it is that mode that complicates things when it comes to setting things up.

You can choose to skip setting up the hotspot mode but keep in mind that you will be regularly prompted to finish the setup process. With the BlackVue DR750S-2CH, you get a simpler setup process, however, you do not get the hotspot feature.

Both these models are straightforward when it comes to their mobile apps. The apps of both cameras vary in many aspects, so it is down to personal preferences as to which one’s better for you. The BlackVue model had a cool chronological feature, which the Thinkware model didn’t have. On the other hand, the Thinkware app had a cutoff voltage setting which was way more useful than its Blackvue counterpart.

Upon looking at their mobile apps, we moved on to assessing the Cloud possibilities of both these cameras. We picked the BlackVue Cloud system over that of the Thinkware. Thinkware’s cloud system is also solid, but if the cloud feature is important to you, then the BlackVue is probably the better choice for you.

Responsible drivers have always tried to look for ways to make their driving experience safe for them and for all others involved. So it comes as no surprise that there has been such a demand for dashcam systems on the market lately.

These particular two models we consider in this article have stood the rigorous test of a large number of drivers, and have come out among the very top products in their category. But which one is the winner between them?

Our choice is the Thinkware F800 Pro as the winner in this comparison, mainly because of its overall performance of the various features it contains, especially the night vision, video quality, and parking mode features.

This doesn’t by any means imply that the BlackVue DR750S-2CH falls short by a lot, and in fact it has certain aspects, like the cloud storage system, where it is even more advanced than its counterpart.

Comparing the prices, we found out that the Thinkware F800 Pro has a higher price than that of the BlackVue DR750S-2CH. This will definitely play a role with some customers, as they might pick the BlackVue just because its price is somewhat lower. In any case, we are talking about two of the best dash cam systems on the market.

Whichever one you choose, you are sure to be pleased with the overall performance. It is in the nuances of the features that you might find preferences over one or the other model.

What is a Dash Cam? How Do Dash Cams Work?