People out on the market looking for a solid dash cam sooner or later come across the BlackSys CH-200. The reason for this is that this dash cam has stood out as one of the better options out there, when it comes to acquiring a solid, high-performance dash cam, with good quality recordings and solid features through and through.

Needless to say how important road safety is for any and all participants in traffic, whether it be within urban areas or outside of them. So that being said, let’s dive in the details of what makes the BlackSys CH-200 a great competitor on the dashcam market!

2 years ago, Korean manufacturer BlackSys presented to the public the CH-100 dashcam, which impressed with its unique design and fascinating features and hardware. CH-200 is its natural successor, following the same design patterns, adding a few functions, and improving a couple of flaws from its predecessor along the way.

The dashcam comes with a cigar power cable, a set of connecting hard wires, a manual, cable clips and of course, the cameras themselves. When it comes to warranty, with every purchase you receive a one year warranty. If you so wish, you could replace the hard wires with a Cellink B type battery.

In terms of storage, you can choose between the free 32 GB MicroSD or the upgraded 64 GB memory card. If those storage capacities seem too small, you can also go with 128 GB. In the event that 128 GB is also not enough space, you could go with the 256 GB option, which would amount to 20+ hours of video footage.

Considering the appearance of the BlackSys CH-200 dash cam, we can conclude that it looks all but the same as its predecessor the CH-100. The GPS mount is located on the top, while the LED is on the front. On the other side all the buttons are recording, the functions of which range from WiFi to event recording and volume.

The microSD card slot is located right about there as well. The ports for the rear camera, the OBD, the power supply, and the GPS are located on the backside of the device.

The housing of the CH-200 is such that it is compact and blends in with its surroundings when mounted inside the car. The shell of the camera is made of polycarbonate and is covered in matte black paint, perhaps amounting even more to the camera blending in seamlessly. The camera seems durable, certainly enough durable to withstand a minor to a medium accident

With the CH-200, Blacksys have opted to insert the exact same camera used in the CH-100, probably because it served its purpose excellently – no need to change a winning formula.  This model does not have a built-in monitor, which means that there is no immediate option to view any footage.

If you want to review any of the recorded material, you would need to transfer the recordings to another device. An interesting highlight of the BlackSys CH-200 is the sound that is automatically generated, should the camera software detect a potential risk of collision.

Many users have found the combination of the speaker and the collision detection software a very useful feature in every-day traffic situations.

The camera sensors, both the front and the rear one, are the same model – Sony IMX322. These cameras can record at a quality of 1080p and 30fps (frames per second). One quite fascinating feature of the BlackSys CH-200 is its ability to record through tinted windows. This is possible as a result of the greatly improved low light image processing on this dashcam model.

Without a shadow of a doubt, we can conclude that the BlackSys CH-200 produces excellent quality low light recordings.

Another important aspect when it comes to dashboard camera systems is the angles at which the cameras record. With the BlackSys CH-200, the front camera offers 135 degrees, whereas the rear camera records at 130 degrees. This is considered a relatively large recording angle for a dashcam.

Moving on to the next feature, we looked at the capacitor that BlackSys CH-200 contains. We discovered that this type of capacitor allows the camera to be operable even in very hot conditions. Being that a dashcam is prone to spend a considerable amount of time under direct sunlight, this can be viewed as a great plus.

The capacitor’s endurance applies in the other extreme as well, as it can operate without a problem even in quite cold weather. When it comes to recording modes, the BlackSys CH-200 offers standard recording or time-lapse recording mode. The latter mode saves on storage space since it records only one frame per second.

The standard recording mode records at a regular rate of 24 frames per second.

Transferring files was made easier than ever on the CH-200, as BlackSys has created apps for iOS and Android. Using these apps you could easily adjust the camera settings as well as transfer footage directly to your phone, bypassing the need for an SD card. A high-speed transfer is also guaranteed, as the apps work with WiFi.

The camera surprised us with some captivating software features, such as the forward-collision warning system, the lane departure warning, and the vehicle start alarm. After exploring the BlackSys CH-200 in detail and comparing it with other products, we decided that it is one of the best options on the market when it comes to dual dash cams. 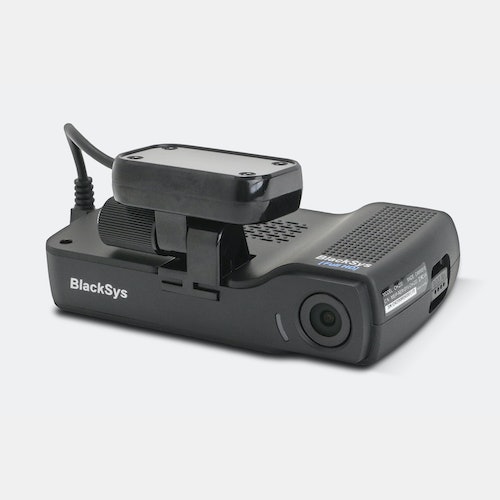 How much footage will the micro-SD memory card store?

It depends on the size of your micro-SD memory card. If you own a 16GB memory card it will have approximately 2 hours of footage. The bigger the memory card, the more footage it can contain.

Why would I need a rear camera?

When driving, it doesn’t mean that an accident would always occur from the front. This way by owning a rear dashboard camera you have a full view of the car, so instead of a 140 degrees angle that a front camera offers, you can have a 280 degrees view, depending on the type of camera.

The battery on the CH-200 can be charged by hardwiring it into an accessory fuse or you can just plug it in your cigarette socket. If you want to charge it faster, we recommend using the hardwiring way.

How does the parking mode sensor work?

The parking mode sensor will only start recording if they sense an impact on your vehicle, or they sense motion. You will first have to turn on the parking mode and plug it into the energy source so it can keep running while your car is off.

What is the operating temperature on the CH-200?

The operating temperature is from -20C to 70C, that’s -4F to 158F. That’s more than most dashboard cameras on the market.

In sum, we can simply conclude that BlackSys CH-200 is a practical product for the pragmatic consumer. We’re talking about a durable and high-quality product that provides excellent quality recordings.

The Best Dash Cams of 2021 for Every Budget and Need

YI Mirror Dashcam 2021 Review: Should You Buy It?